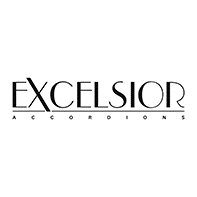 The Excelsior Company was established in New York in 1924. The high quality of accordions manufactured by Excelsior made it quickly popular throughout the United States.

The greatest popularity of Excelsior accordions was reached after the Second World War as they became a "must" for any big orchestra: Charles Magnante, Art Van Damme, Pietro Deiro Jr., are just a few among the many prominent players who chose Excelsior. In 1948 a new plant was established in Castelfidardo, Italy, to expand production and sales. Since then the excellent sound, quality and fine look of Excelsior accordions have been appreciated all over the world.

Today Excelsior goes ahead in its tradition of quality and prestige. The Excelsior accordions are still built with selected materials and according to the best traditional craftmenship methods.

To own an Excelsior accordion today means to own a prestigious instrument and ideally to follow the paths of the best and most popular accordion artist of past and present.

Other manufacturers from Italy →